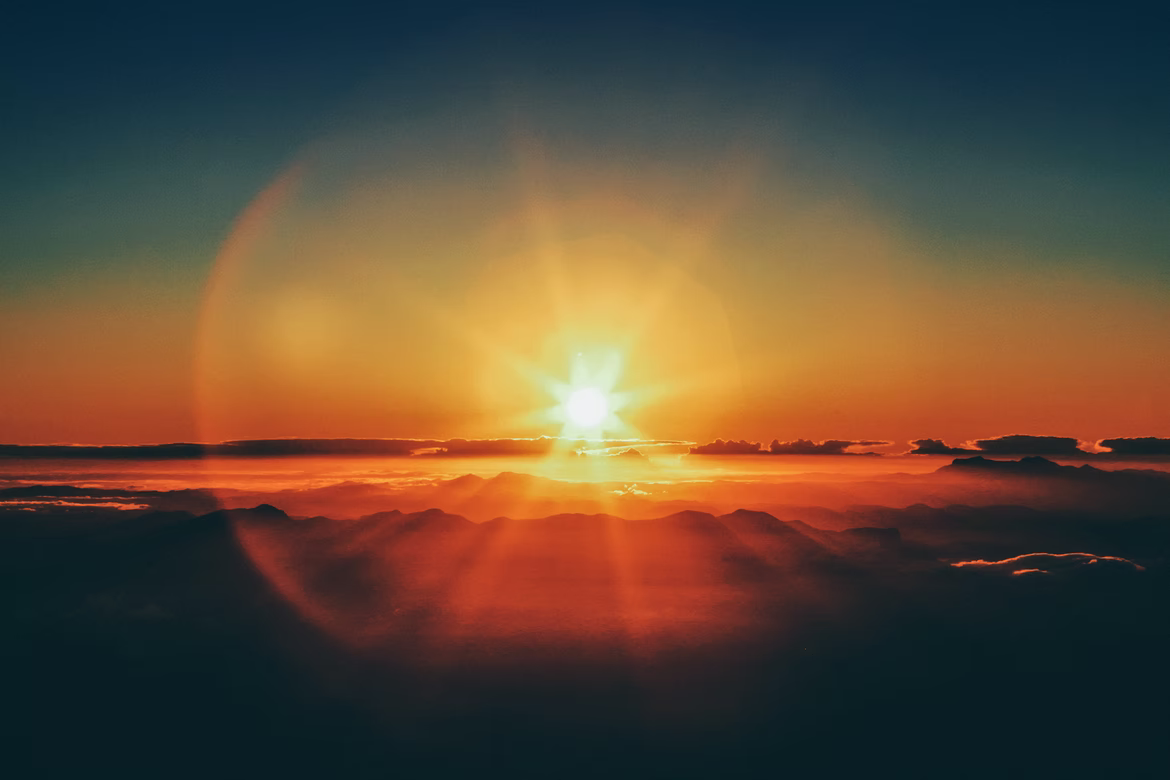 At the beginning of what we know as time, an event kicked off an enormous explosion, so the theory goes, and all of space and time erupted into existence. Thirteen billion years later and change, you’re reading this article.

The Big Bang theory posits that the universe fit into one speck called a singularity. It contained every single atom of matter in you, your parents, every other human who has or will ever exist, all those countless stars and their solar systems, and all the stuff we don’t even know about yet.

It was also intensely hot. For reasons scientists don’t understand, it erupted into a period of growth at unimaginable rates about 13.8 billion years ago.

The expansion happening as it did would mean that it did so—it moved outward from that initial singularity—at a speed faster than light. As our current understanding of physics renders that speed an impossibility, this is something else that scientists do not understand yet.

It was all energy and heat for many thousands of years. Eventually, the universe expanded and cooled enough that atoms could begin forming from the subatomic matter that had previously comprised the entirety of the universe.

The Appearance of Light

About 380,000 years after the Big Bang, electrons and neutrons began glomming together and forming atoms. As those free electrons began joining with other particles, light began to be a thing that could be seen (not that there was anyone or anything to see it at the time).

Cooling continued, and so did the universe’s expansion at light speed, 186,000 miles per second (300,000 km per second). While this happened, matter continued to accrete, eventually forming systems, and the first stars are thought to have come into existence between 100 million and 250 million years after the Big Bang.

They weren’t stars like we know them, though. They were huge—up to 100 light-years in diameter, but they altered how the universe evolved. They heated surrounding gases, and due to the physics of a star’s life-cycle, they began producing heavier elements and dispersing them into the universe.

This process, called nucleosynthesis, happens when stars fuse lighter elements to create the energy that drives them. Once a star has run its course, it can go supernova, which produces even heavier elements.

In the beginning, the singularity was unfathomably hot. At billions of degrees Celsius in the first attoseconds of existence, the universe was too hot for particles to combine into anything.

It wasn’t until 380,000 years after the Big Bang (see above) that light could be seen, so it was hot, dark, and full of energy.

Giant stars were mentioned earlier, and millions of years later, stars formed that are more in line with what we think of as stars. Intergalactic matter (mostly ionized hydrogen, which is a hydrogen atom that has lost its electron) began reionizing, which started clearing things up and allowing matter to start congealing.

Why Do We Think This?

The evidence of the Big Bang theory (and it’s widely accepted, but it’s still a theory, and we may never know for sure just exactly what happened) came in the early 20th century when Edwin Hubble observed that galaxies were moving away from us here on earth.

He also saw that the farther away those galaxies were, the faster they were moving.

His interpretation of these observations was that the universe is expanding. Extrapolation by Hubble and countless scientists since brought us to the idea that, at some point, the universe must have been condensed into what we now call a singularity.

The energy left over from the Big Bang is called Cosmic Microwave Background radiation (CMB), and its discovery has bolstered the efficacy of the Big Bang theory. By looking at it, we are essentially able to see evidence of what the universe was up to when it was a mere 380,000 years old.

Exactly how CMB essentially confirms the Big Bang theory involves terms like baryons and cold dark matter, but its discovery (by accident) in the 1960s was a scientific coup. A scientist named Ralph Apher predicted the existence of CMB shortly after World War II.

In 1964, two radio astronomers detected a buzzing sound that seemed to emanate from everywhere in the universe. The two went so far as to remove pigeons from their antennae before realizing what they were hearing.

Implications of the Theory

The Big Bang theory explains the beginning of the universe, and it accounts for all sorts of clues lurking in space like CMB and how stars and planets formed and affected the course of the universe’s evolution. But it also helps us get some ideas about the possibilities of how it all might end.

When Edwin Hubble noted the universe’s expansion and theorists worked out that said expansion must have had a starting point, some astrophysicists began thinking about what expansion might mean for the future.

Because an eternal expansion seemed unlikely, and because, as mentioned above, scientists can’t yet explain why the expansion started in the first place, what if it stopped and reversed into contraction?

This gave rise to the idea of the Big Crunch. This theory says that eventually, the expansion will stop, and gravitational forces related to the scalar field and dark matter would begin pulling the edges of the universe back in.

Acceptance of this theory means that the universe is middle-aged at this point so that in another 20-ish billion years, the universe will collapse in on itself, returning to the impossibly dense state that started things out 13.8 billion years ago.

The Big Crunch relies on the idea that gravity always wins and that whenever there is no force pushing against gravity to counteract it, every iota of matter will succumb to it.

Many scientists have embraced a different theory for the end of all things. The Big Freeze posits that the expansion of the universe will go on unchecked.

Thinking back to how things began, we remember that the universe was so hot and dense that atoms couldn’t adhere, and light couldn’t be perceived. After nearly half a million years, it had cooled and expanded enough that those things could happen.

Continuing this track: the universe continues expanding, cooling, and decreasing in density. Entropy will increase until energy no longer exists. This is known as heat death.

Also, atoms in the universe will be too far apart to form new stars. Older stars will run the course of their lives and die, as they have done for billions of years, but will no baby stars will arise to replace them. The universe will eventually be a uniformly dark, cold, and empty space.

Our sun will reach retirement age and destroy the earth billions of years before the Big Crunch, though, so don’t lose any sleep over it.

Which One Is It?

Whether the end comes with a Crunch or a Freeze depends on the density of the universe, which we do not definitively know. If the universe’s density is equal to or higher than critical density, then the Crunch is highly probable.

If the universe is less dense than that, though, it will not ever halt its expansion, in which case, the Freeze is in our future.

Another theory—which has admittedly lost traction in recent years—is the Big Rip, which is similar to the Big Freeze in that it allows for the continued, Big-Crunch-free expansion of the universe.

As things continue spreading out, galaxies, solar systems, planets and planetoids, atoms, and nuclei will be progressively torn apart.

Eventually (and inconceivably), time and space themselves will join all those things in being torn apart. Don’t think too hard about what “time being torn to pieces” would look like. It’s more of a Zen koan than anything else.

The idea that other universes exist is the meat and potatoes of the multiverse theory, which states that ours is just one universe among many. How many? We may never know. But the Big Bang theory does not rule out this possibility.

While the idea of multiple universes gets a lot of play in comics and science fiction, and it tends to engender thoughts of parallel realities where your evil twin is the cruel dictator of the Canadian Empire, the reality of the multiverse theory states that our universe is just one bubble floating around in whatever is out there—and others are floating in that same stuff.

Before you blow this one off as ridiculous fantasy, know this: in 2017, English graduate student Ruari Mackenzie found an inexplicably large and cold spot in space that could very well be a bruise from our universe colliding with another. Mind-bending, isn’t it?

There have been other theories. Remember that until Edwin Hubble’s 1920s observations, most scientists thought that the Milky Way was essentially all there was to the universe. That wasn’t even 100 years ago.

The Steady-State theory says that the universe maintains the same density at all times in all places and does not include a singularity or the explosive expansion of the Big Bang theory. It has fallen out of favor, but it’s still a theory.

There is also evidence backing the Projection Theory, in which all matter in the universe is actually a holographic projection. It sounds crazy, sure, but it’s one of the more believable explanations out there when it comes to explaining quantum entanglement.

Astrophysicist Ethan Siegel makes a convincing case against the existence of that initial singularity from whence the universe sprang, but wrapping your head around it involves dissecting the phrase “past-timelike-incomplete.”

The Big Bang theory is widely accepted as the definitive theory, but observable conditions and occurrences in the universe seem to disprove it. But the same can be said of all our theories of how the universe began.

Embracing the theory allows us to come close to knowing what the universe was like all the way back to attoseconds after it began. But it raises questions about how our universe will end.

Astrophysicists will continue studying, debating, arguing, and theorizing further until that end—however it happens—comes.